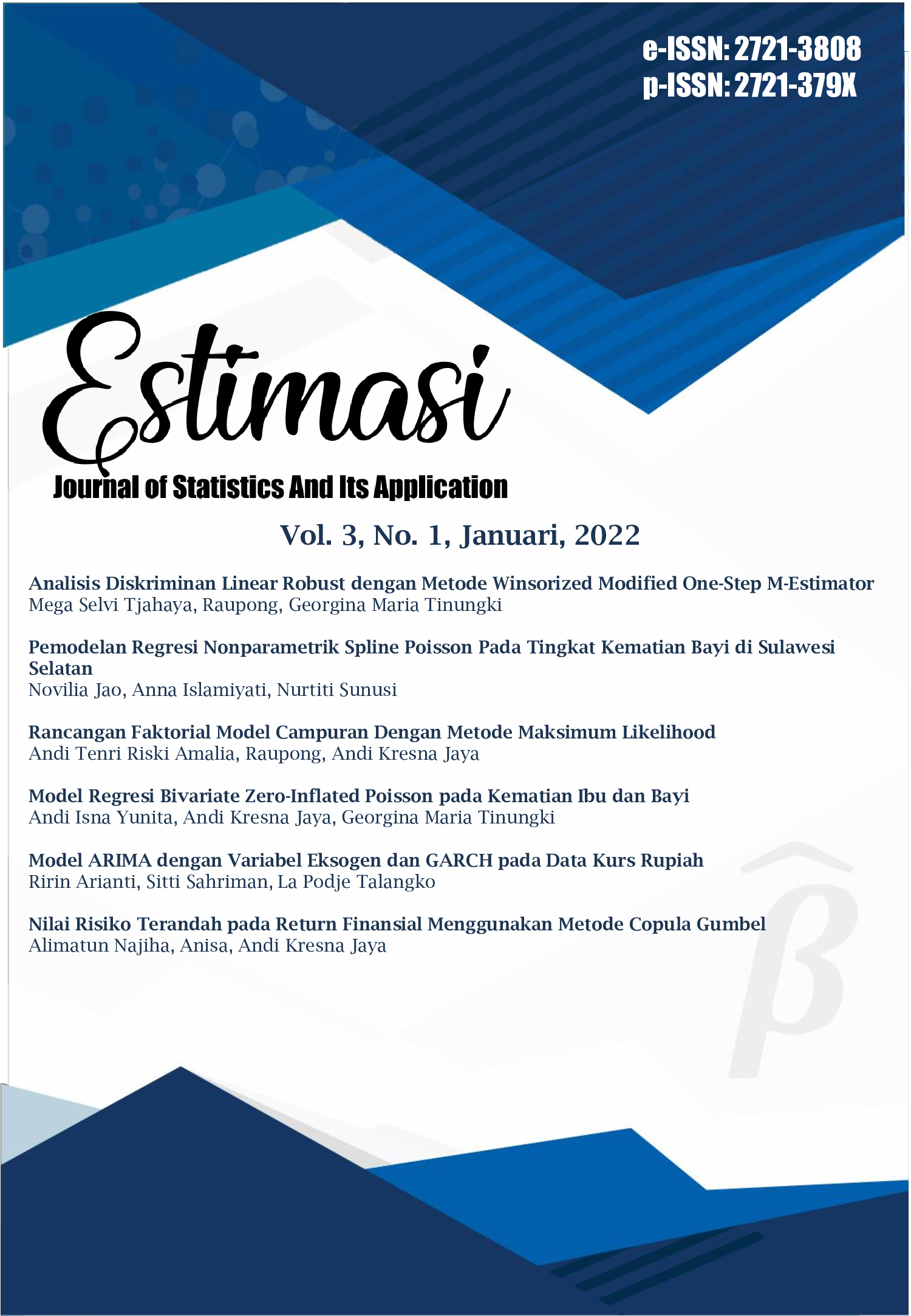 Poisson regression analysis is a method used to analyze the relationship between predictor variables and response variables with a Poisson distribution. However, not all data have an orderly pattern, so the Poisson regression is not appropriate to use. To solve this problem, a multivariable Poisson nonparametric regression with a spline truncated estimator was used. In this research, the estimation parameters of multivariable Poisson nonparametric regression was applied to data of infant mortality rates in South Sulawesi in 2017. The infant mortality rate can be measured from the number of infant deaths under one year. The method of selecting the optimal knot point uses the Generalized Cross Validation (GCV) method. The best model is formed on a linear spline model with one knot point. Based on the estimation of the parameters formed, it shows that the variable number of babies with low birth weight (x1) and the number of infants who are exclusively breastfed (x3) significantly affect the number of infant deaths.

Variance is the amount of statistics which measures how far a set of numbers in observation are spread out from its mean. In experimental design, variance are caused by the effect of treatment, block and error of experimental can be estimated by variability of error that commonly referred to variance component. In this study, the maximum likelihood method with Hartley Rou modification was used followed by the Newton Raphson method which was applied to a complete randomized block factorial design mixed model with factor A being fixed and factor B being random. The results of this study for rice production data showed that there is a significant effect on the interaction of genotype and location on rice production. The estimated value of the variance component obtained indicates that there are variations in the influence of location factors, and genotype and location interaction factors on rice production.

Autoregressive integrated moving average with exegenous variable (ARIMAX) model is the development of ARIMA model with addition of other time series data as exogenous variable that affect the dependent variable. ARIMAX model is used to analyze and predict data on the rupiah exchange rate against the US dollar with inflation as an exogenous variabel. The exchange rate has an residual variance that is not constant  so that the GARCH model is used to overcome the problem of heteroscedasticity. The results of this research show that forecasting the rupiah exchange rate against the US dollar fot the period January 2010 – December 2019 with the ARIMAX(0,1,1) – GARCH(1,0) model is the best model with a MAPE (1,1655) value which shows a low percentage compared to the ARIMAX model.

The calculation of VaR is assumed normal distribution while the conditions in the real world distribution conditions of the return value depends on the market conditions that occurred at the time. Thus, this makes VaR estimates invalid which results in portfolio risk occurring greater than the predetermined risk. Therefore, In this study, the estimated risk value uses the Conditional Value at Risk (CVaR), which measures the expected value depending on what is the worst percentage of the risk loss, and using Copula Gumbel to model financial return in the investment data of PT. Telkomunikasi Indonesia tbk and PT. XL Axiata tbk. for the period March 11, 2019 to March 10, 2020. In this study, the CVaR estimation results for the 99% confidence level is 0.231, while for the VaR estimate it is 0.192. This indicates that risk value with CVaR estimate is better able to show higher risk than VaR.