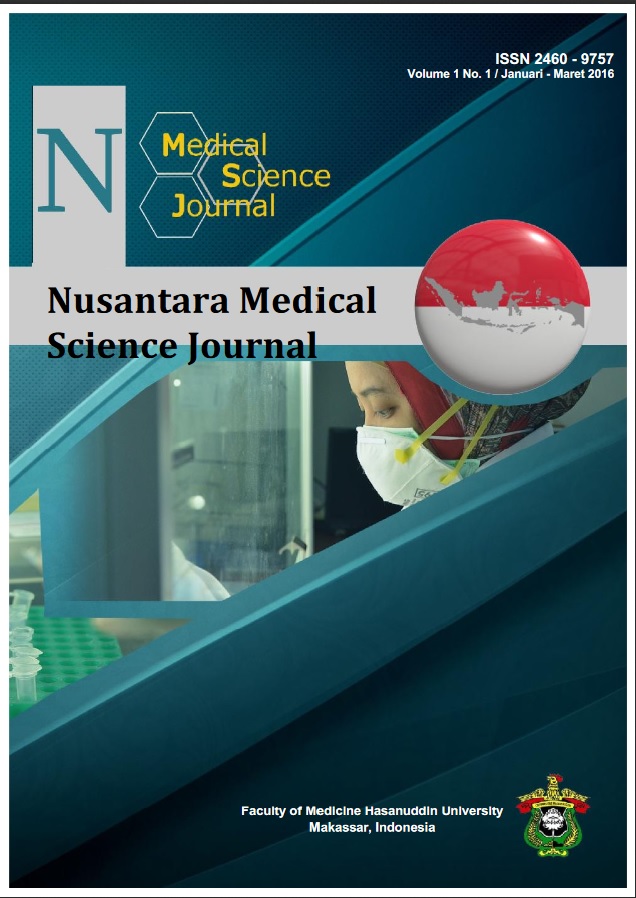 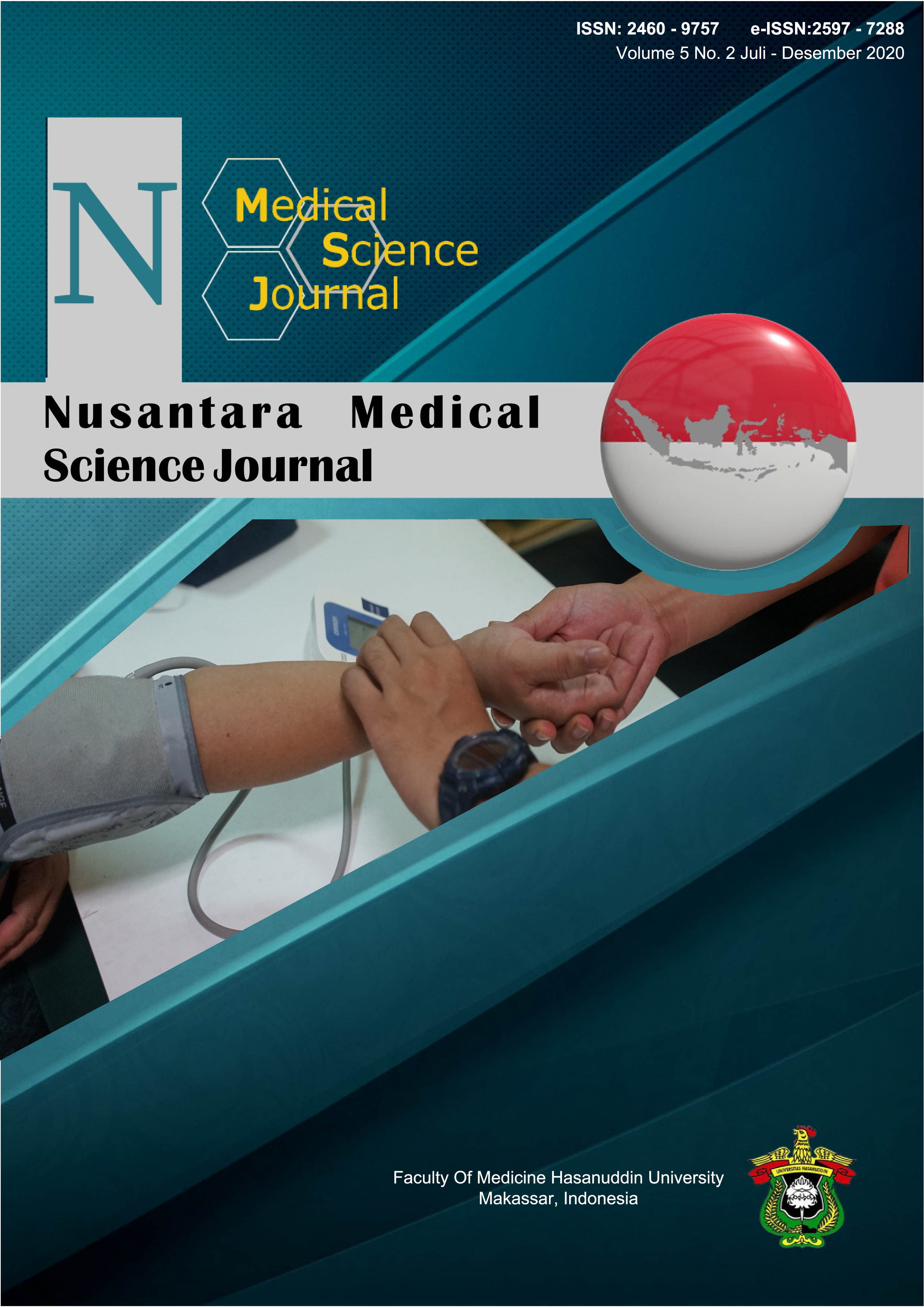 The Relationship Between Histopathological Grading and Metastasis in Colorectal Carcinoma Patients

Introduction: To Colorectal cancer (CRC) is a malignancy in the large intestine caused by uncontrolled cell growth. The cause of death due to metastasis and the prognosis is determined by the stage that can be assessed using Dukes classification or TNM (Tumor Nodes Metastasis) staging system. Determination of histopathological grading is important because of the differences in radiosensitivity, local behaviour and the metastasis tendency. The aim of this study is to determine the relationship between histopathological grading and metastasis in colorectal cancer patients. Methods:  This study is a cross-sectional study using secondary data from the medical records of CRC patients at the RS. Dr. Wahidin Sudirohusodo and its networking hospital, that were obtained by consecutive sampling. Inclusion criteria are all patients who had surgery and have the results of histopathology, radiology and other datas that may be used as a reference for determining the staging based on the Dukes classification and TNM staging system Results: The number of CRC patients during January 2008 to April 2012 was 268 patients, 55,6% of them were males and mostly their age were around 51-60 years old (25,4%). Most of the CRC location was in the rectum (61,2%) and the highest number of metastasis location was in lymph nodes (40,4%).  Out of 179 patients who had result of histopathological examination, adenocarcinoma type (100%) and moderately differentiated adenocarcinoma (45,3%) were the most frequently histopathological grading found. Most of the CRC stage based on the TNM staging system was stage IV (27,4%) and based on the Dukes classification was stage D (26,8%).   There is a significant relationship (p<0,001) between histopathological grading and metastasis, and it showed that poorly differentiated adenocarcinoma was more frequent in advanced stage, based on both the Dukes classification and TNM staging system. Conclusions: There is a significant relationship between histophological grading and metastasis. Poorly differentiated adenocarcinoma is more likely to be found in advanced stage of CRC.

Introduction: Hypertension is one of the major causes of stroke. Stroke can be prevented by controlling hypertension. Cucumber proved to have antihypertensive effect. cucumber contains ficetin compounds that play a role in antihypertensives. This study aims to determine the effectiveness of cucumber extract to controlling hypertension. Methods: The research method used is pre-test and post-test matched control group. The 6 wistar rats were divided into 3 groups consisting of 1 treatment groups and 2 control groups. Group P1 was induced by using ketamine 0.05 ml + epinephrine 0.2 ml + 6 ml cucumber extract, group K (-) induced by ketamine 0.05 ml + epinephrine 0.2 ml without extract, and group K (+) induced by using ketamine 0.05 ml + epinephrine 0.2 ml + captopril 2.5 mg Results The results showed that epinephrine can be used as a hypertensive inducer. cucumber extract as much as 6ml can provide antihypertensive effects. In Vitro test result showed that cucumber extract can reduce blood preassure by an average decrease in blood preassure of 102 mmHg While captopril 25,5 mmHg. Conclusions: in addition to the in vitro test, the results of the in silico test showed that the cucumber extract can significantly reduce blood pressure compared to anti-hypertensive drugs (captopril). the value of fisetin in cucumber is -9.3. and captopril only -5.7.

Introduction: All opioids have varying levels of sedative effects with increasing dosages, although with different strengths. Therefore, the opioid component as a sedative regiment is usually maintained at minimum dose for adequate analgesic with regard to patient comfort. Along with the progress of knowledge, parameters have been found to measure the level of analgesic and sedative. Methods: The principle of measurement is done by using the diameter of pupil and then analyzed through AlgiScan and compared to certain standards. The using of pupilometers AlgiScan in assessing the level of sedative analgesic will reduce the level of subjectivity and errors in measurement. Results: The use of Remifentanil has a faster effect of sedative as proven by lower “AlgiScan” score in the pre-intubation phase. In addition, the use of Remifentanil also provides a hemodynamic view of lower arterial pressure, both pre and post intubation condition. Conclussion: Both Remifentanil and fentanyl are able to provide analgesic with sedative and stable hemodynamics. Remifentanil is proven to be superior with better and faster effect and also faster substance elimination with lower doses.

Introduction: Management of pulmonary tuberculosis (PTB) from primary and secondary health centers might affect the result of sputum acid-fast bacilli (AFB) smear and features of lung computed tomography scan (CT-scan) presented in tertiary hospitals. The study aims to investigate comparison between CT-scan features of PTB with sputum AFB smear in Wahidin Sudirohusodo Hospital as the top referral hospital in the Eastern part of Indonesia. Methods: This is a retrospective study of patients diagnosed as PTB by pulmonologist of nine months period. Patients with available CT-scan and sputum AFB smear results are included in the study. CT-scan features re-evaluated with RadiAnt DICOM viewer for standardized reading. The relationship between data obtained was analyzed with a chi-square test. Results: Sixty-one PTB patients were entered into the study. The three most common features found in CT were consolidation (93.4%) followed by Tree-in-bud (91.8%), and fibrosis calcification (85.2%). Relationship of CT features and sputum AFB smear was significant on cavity (p-value: 0.002) and pleural effusion (p-value: 0.020). However, unlike cavity (OR = 1.667), pleural effusion has opposite relationship (OR = 0.205) with sputum AFB smear. Conclusions: Pulmonary tuberculosis CT features seen in top referral hospitals can be very severe with consolidation and tree-in-buds as the most common features found in more than 90% of the cases. Feature of cavity may help radiologist to distinct highly active PTB with positive sputum AFB smear while presence of pleural effusion should raise the suspicion from pulmonologists to add further laboratory investigation.

This journal publishes review articles, case reports, and original articles. All papers published in NMSJ are freely available as downloadable pdf files. NMSJ is accredited by the Directorate of General Higher Education, the Ministry of Research, Technology, and Higher Education, Indonesia.

Starting in 2021, Nusantara Medical Science Journal will only accept manuscripts in English. 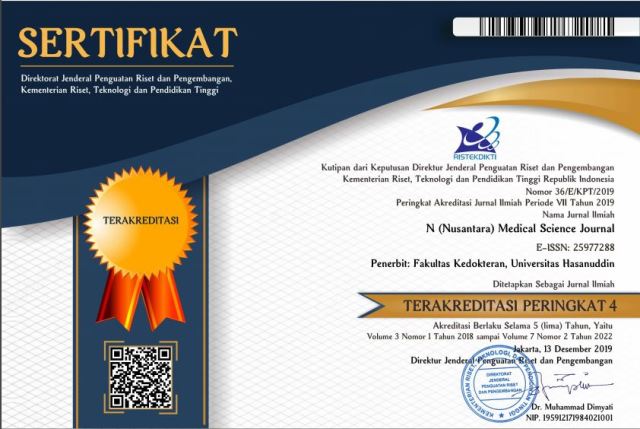 Starting in 2021, Nusantara Medical Science Journal will only accept manuscripts in English (British or American).